After a successful first competition in 2013, the Kimono Competition returns to AiCon in 2014.
Part Fru!ts, part Cosplay, all Kimono!!

Once again there will be THREE categories and competitors of all ages, genders and kimono experience are invited to enter ONE of the three following: 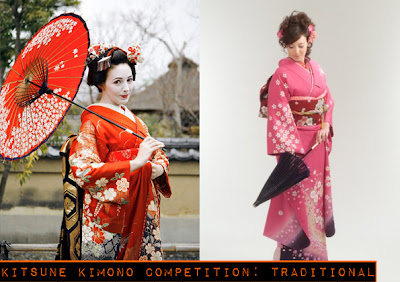 Competitors in the Traditional category will be judged on the formality and the neatness of their kitsuke (the way they have put the kimono on) as well as the propriety of their ensemble (have they teamed an appropriate obi with their kimono? are they wearing the correct footwear for the formality of their ensemble, ie. geta with yukata or zori with kimono). There are no restrictions placed on the formality or the seasonality of the yukata/kimono entered into this category so along as the competitor is wearing a cohesive ensemble. Competitors with long hair should style their hair in an up-do such as a neat bun. For men with a long hair, a neat ponytail is recommended. It is recommended that only simple jewelry (preferably no jewelry other than wedding bands) is worn. Likewise makeup should be kept clean and subtle and, if possible, hair should be a relatively natural colour (blonde, red, brown, black as opposed to pink, green or purple). 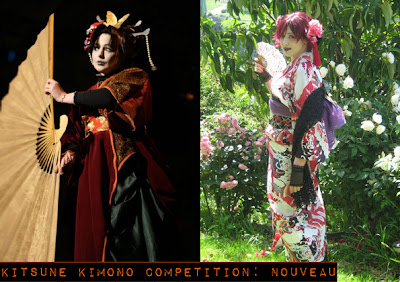 Competitors in the Nouveau category have a larger degree of freedom in regards to makeup, hairstyle and accessories, however each compeititor should be able to give an explanation for their choices when queried by the judges. This category will cover both street (kimono hime) style and wa-lolita (wa-lolita will be judged with particular emphasis on fabric patterns and accessories. Efforts should be made to emphasise the ‘wa’ elements of the outfit through the choice of footwear and accessories). While the rules are more relaxed than the Traditional category, if a competitor is wearing their kimono or yukata without, for example, a defined o-hashiori (waist fold under the obi sash) they will need to be able to justify this choice to judges when queried. 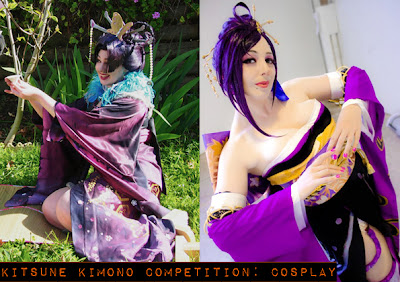 Competitors in the Cosplay category will be required to wear a cosplay of a kimono wearing anime, manga or game character such as those from Ruroni Kenshin, Sakuran, Hell Girl, Samurai Warriors or even Bleach. Most anime and manga include an episode in which characters wear kimono or yukata during festivals and New Years’ celebrations including Love Hina, xXx Holic and even Sailor Moon. Competitors in this category will be judged not only the accuracy with which they portray the character they are dressed as but also on their fabric choices and the accuracy of the kimono elements of their cosplay. For example, where possible Japan-ese fabrics such as silk, cotton and hemp should be used instead of satin, Chinese brocade, jersey or cotton drill. Pre-purchased cosplays may be entered into this section with the proviso that they fit the above requirements.

The judges reserve the right to award a fourth ‘judges choice’ award if they feel there is a competitor of particular merit who deserves recognition.

The example images are of past Kitsune President, Midori Emerald and date from 2005-2012.

The judges’ decision is final. No correspondence will be entered into.

To enter, please send an email with the following details to kimonocomp2014@gmail.com :
Name:
Stage name:
Contact email:
Category:  Traditional, Nouveau, Cosplay
A short summary of your kimono entry:  Please include if you have made or sourced any elements or any inspiration.
Name of the character and series that you are cosplaying from: only applicable to cosplay entrants

Please also include an image attachment of your inspiration for your kimono ensemble. If you are entering the cosplay section this should be an image of the character you are cosplaying. If you are entering either Traditional or Nouveau this may be a motif, picture of a kimono model or extant image of a style you are trying to replicate.
Posted by Kitsune - Kitsuke and Kimono Club at 17:58